It’s hard being a working-dad, especially when the boss keeps me late and I miss my son’s bedtime. As soon as I got home last Friday I rushed up to his room only to find my wife switching off his light having successfully got him to sleep. I sighed dejectedly, having hoped for a glimpse of his bright blue eyes. As I turned back towards the hallway, however, I caught a glimpse of something else. Eyebrows raised, my wife shook her head as she too looked at the damaged wall, the pair of us thinking the same thing: can we get protective coatings for interior painting? It looked like I was going to spend my weekend being a painter. Again.

“What happened this time?” I asked as I sit down to my lukewarm evening meal.

“I turned my back for five minutes,” she protested. “He’s a ninja. I swear.”

“Perhaps that was a samurai sword he was trying to draw,” I mused, thinking back to the thick black scribbles which now adorned the previously baby blue walls of our son’s bedroom. “What did he do it with anyway?”

After dinner I phoned my mate who’s a painter to ask if there was any way of getting permanent marker off a wall. Once he’d finished laughing at our predicament, he informed me that there was no such thing as a protective coating for regular interior painting in a child’s bedroom. “Not unless you have some piece of factory machinery in there, anyway,” he chuckled. “Just use a paint with a vinyl or silk finish. They’ll wipe clean and basically have a protective coating built in.”

Armed with professional painter advice, the next day I found myself standing in the middle of the aisle at a home-ware store, scanning the shelves for the right shade for my impromptu interior painting project. Having decided to bite the bullet and redecorate the whole room, my wife and I had settled on a space theme, our son already showing quite the obsession aged just three. With tins of navy blue for the ceiling and pale blue for the walls selected, and in-built protective coating confirmed, I headed for the counter. On the way, however, I spotted something which just might save me from becoming “painter-dad” again in the near future.

“What’s that?” my wife asked as I waddled awkwardly into the house with the large, flat package an hour later.

“Wait and see,” I said, disappearing up the stairs to begin my task.

It took two days for the painting to be completed, consuming my entire weekend. For the last hour I banned my wife from entering whilst I put the finishing touches to the design. I won’t consider myself arty but I may be contemplating a career in interior painting after this triumph. Although if an astronomer saw the glow in the dark star constellations on the ceiling I’m sure entering NASA would be out.

My son ran straight at the rocket-shaped blackboard, picking up a white stick of chalk and instantly beginning to draw … something. Beaming, I glanced at my wife who looked utterly amazed.

“See, even though his walls are now child-proof, he’s got something far more interesting to draw on.”

“It’s perfect,” she said said. “Although I think the rest of the house need to be repainted with that protective coating paint,” she added. “I just caught him in the living room holding a Biro and looking like he was contemplating some more artwork.” 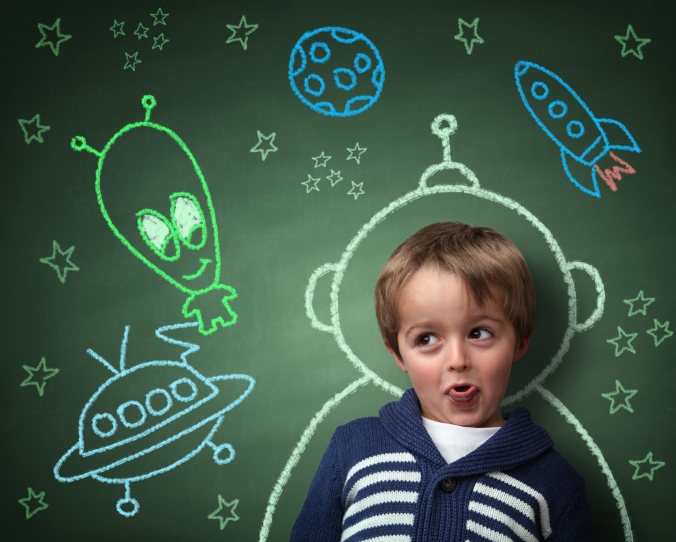